Note from GapFill.org’s Founder: It has been almost a year and a half since I had the privilege of being at the Mesem New Testament dedication in Papua New Guinea.  This was a twenty year work for missionaries Neil and Kathy Vanaria.  Neil was able to return to Papua New Guinea in April of 2014 to check on the Mesem to see how the churches and the Christians were doing.  I told Neil that he must have felt like the Apostle Paul checking on his churches he planted.  Neil has just returned and sent me the following update.  Thank you GapFill donors for giving toward the Preaching the Mesem New Testament project as Neil was able to use the donated monies to help the churches and Mesem Christian missionaries in need.  Here is Neil’s update.  At the time we were celebrating the arrival of the Mesem New Testament (NT) with our Mesem friends our schedules allowed us to participate in the initial celebration, however, none of us were able to participate in the celebration & distribution which took place in almost every village after we left. There are however some great reports. In Hobu village, an older woman who had worn eyeglasses from a young age was very concerned when she heard she was to get her own copy of the Mesem NT. Her eyes were pretty bad and she used eyeglasses for everything, cooking, going to the garden, walking along the trail. Her eyes were bad enough that reading was not something she could do very easily. So when she heard she was to get her own copy of the Mesem NT she became concerned that she might not ever be able to read it. So she simply asked the Lord to heal her eyes so she could read the Mesem NT when she received it. That was months before the NT arrived. And on the day she received the NT the Lord healed her eyes. Not only does she read but she no longer needs eyeglasses at all! 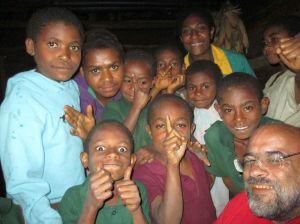 Neil’s Jungle Selfie of him & some children of the Niso village after they spent about an hour together reading the Gospel of John in Mesem.

My visit to the Mesem also brought me to Niso village where we had done a comprehension check of 1, 2, 3  John & Jude back in 2008. On this visit I could see there seemed to be some significant interest in adult literacy and producing more books – especially Sunday school material. Later the village elder, Fisika,  asked me if I knew why there was so much interest in reading even though the initial celebration and distribution of the NT was more than a year ago. He then told me that after they had brought the Mesem NT in cartons from Samanzing they decided to have their thanksgiving and distribution service the next day. Fisika said that during the service when they cut the sealing tape from the cartons & opened them there was such a strong presence of God that many people could not stand up!  So now they feel like the best way to get that power is by learning to read. Many younger Mesem can read and read well. Adults have not always been interested. So I suggested to Fisika that each Sunday they read 3 or 5 verses of John together after church. Taking the time to be sure each person who comes to that Sunday reading lesson can adequately read the selected verses, then assigning those same verses as practice through the week in preparation for public reading the following Sunday. Repeat each week. It shouldn’t be long before people who had not learned before will feel comfortable reading Mesem. 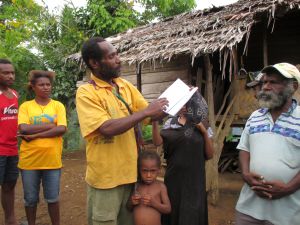 I also delivered 6 copies of our current project – a New Testament cultural reader called “How the Jews Lived” to Yanga, Dick, Funkeka, Kundolo and two vernacular school teachers, Konaga & NoBruce. Their job will be to read through the book – which I had printed before leaving the US – to make spelling & other corrections. Once that is done they will mail the book to me and I will enter the final corrections into the computer. Once in final form I will email the file to the Evangelical Brotherhood Church print shop in Lae. I met with them and they said they would be happy to print out the book – about 65 pages long – for us. The print shop manager has given me the bank details so I can send payment from here and I also introduced him to Yanga & Dick who will come down from the village to proof-read the text before production begins. The Yanga Explains picture is of Yanga telling people in the village about this new book we are producing. After talking things over with Dick & Yanga we have decided to begin translating the Book of Job into Mesem. It really fits their world view of “if you do nothing bad, nothing bad happens to you”, of God’s control over our lives and of the unity of man & woman in marriage. I will spend about one day a week preparing the rough draft in Mesem and sending it along to Dick & Yanga a chapter at a time. Others are interested and have already begun translating the Psalms. Dick Hedzure is very frustrated with the contentions of adults in Samanzing but continues in his calling as a teacher of the Gospel to children and young adults in Samanzing & Mukuwe villages. Yanga Tumbe lost his younger brother earlier this year. Yanga’s brother was working far away in Alatau when he died and so communication and repatriation of the body back to the family were very time consuming. While Yanga remains very busy preaching and teaching in Mesem his real priority needs to be building a house for his family. We talked about that again. 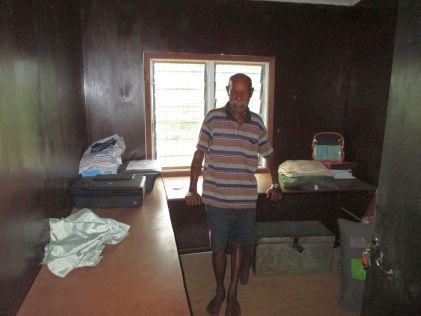 Funkeka Karise & husband Sikiong have dedicated a room in the house which Sikiong built of concrete brick, the room will be used to support Mesem NT activities. In addition to safely storing NTs which are yet to be distributed, Sikiong is in the process of getting bids to install solar electricity into the house. Once that is complete we will have a place to print Mesem materials and quite possibly reliable email & telephone communication. Kitiwanu Lounu has made a couple of visits out to the east Mesem to promote reading and NT distribution. He has for the last year held Bible studies, scripture reading & worship sessions under a palm-leaved roofed sun shelter he built next to his own house. People meet twice a week with Kitiwanu. Ulam Papane & Kimambi Kumbo continue to support reading the Scriptures in Mesem and will help with corrections to “How the Jews Lived” and in editing/revising of the Book of Job. While there were a lot of conversations I did not get to have, I am really encouraged to see & hear the Mesem NT is being widely used and still supported by the community. Neil and Kathy Vanaria are currently working on the translation of the Tok Pisin Study Bible while they “keep tabs” on how the Mesem are doing.  Visit the “Items Needed” tab on the GapFill.org website to see how you can continue to help the Mesem in the Preaching and Teaching of the Mesem New Testament.  To receive GapFill.org’s blog posts automatically via email, enter your email address in the “FOLLOW GAPFILL VIA EMAIL” box on the right-hand side of the blog and click “Follow”.