Note from GapFill.org’s Founder:  Hearing aids for Phil Rojak was one of our first missionary needs at GapFill.org.  This was one of the reasons that we realized we needed to start reaching out to others to help in meeting some of these needs as they were getting beyond what my husband Bill and I could meet.  We posted Phil’s need back in 2011 and waited to see what God would do.  Phil received some donations but not enough to meet his need.  Then Rev. Paul Wahl from Shakopee, Minnesota emailed GapFill.org with this note, “ I saw on your website that a missionary was in need of hearing aids. Starkey, the company that makes the most advanced hearing aids in the world, is located in our community — Eden Prairie, MN. The company operates a massive charitable foundation from which it uses donations to provide hearing aids to those in need.”  So I contacted Starkey to see if they could fill the need, also mentioning that Phil was scheduled to return to Papua New Guinea in January 2013.  (Nothing like asking for a huge favor and then saying… oh…by the way…can you hurry up too.)

Then one evening Brady Forseth, the executive director of Starkey Hearing Foundation, left me a voice mail.  He was traveling for 6 weeks throughout West Africa, India and the Philippines and was interested in helping Phil with his need and asked that I get in contact with him.  So the connection began.  Since Phil was scheduled to be in Papua New Guinea (PNG) in January 2013, they were in contact with Phil and felt that analog hearing aids would be the best fit for Phil since those type could be re-calibrated in PNG. This is where Phil’s story picks up…

This past week has been amazing. Prior to Christmas I was called by Bill Austin at the Starkey Hearing Foundation asking me if I could come up to Minnesota to be fitted for hearing aids. After making arrangements to arrive late afternoon on the 27th of December I made the 10 hour drive from Springfield, Missouri fully expecting to receive a set of analog hearing aids. Due to in-climate weather I arrived an hour later than hoped but Mr. Austin encouraged me to come straight into the office anyhow. I arrived at 6 PM and was met by a small group of individuals that had obviously stayed on past regular hours just to service my need. As Mr. Austin prepared the impressions for my new hearing aids I happen to glance up to the nearby office cubicles and noticed Mr. Austin’s name and the title of CEO. I was humbled by the fact that the CEO himself was personally looking after my needs of  better hearing. 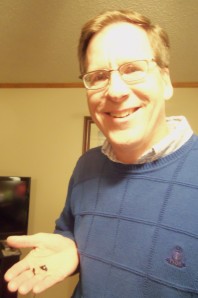 But that did not end the amazement. When I went in to the audiologist’s office to try on the hearing aids I noticed that the aids were not analog but instead the coveted digital aids that would enable me to hear better than I had ever heard in my life. Than due to my remote location and challenging climate in Papua New Guinea, Mr. Austin provided a second set of hearing aids for back-up just in case I need to send the first pair in for repairs or calibration. It was with great joy that I shook Mr. Austin’s hand and said thank you for his generosity – a generosity that will help me to better do my work in Papua New Guinea.

I am very happy for GapFill and Joyce and Bill Turner for getting the ball rolling by making preliminary inquires with the Starkey Hearing Foundation regarding the possibility of servicing my needs. I am also thankful for the several donations provided by individuals I didn’t even know who provided funding for the hearing aids, funding that was donor approved to be forwarded to the Starkey Hearing Foundation to assist in their goal of providing 100,000 hearing aids per year worldwide to the hearing challenged. Additionally, I am now in consultation with Starkey Hearing Foundation to be present with their team when they visit Papua New Guinea in March of this year. So God may have even greater plans that come out of this entire experience.

To God Be The Glory!  Thank you Starkey Hearing Foundation!!

Phil and Kim Rojak have been in Papua New Guinea since January 2010 focusing on evangelism and discipleship. They are also assisting the Assemblies of God of Papua New Guinea to develop a comprehensive program dealing with those affected by HIV/AIDS and prevention strategies for the same.   Learn more about Phil and Kim on their website.  To receive GapFill.org’s blog posts automatically via email, enter your email address in the “FOLLOW GAPFILL VIA EMAIL” box on the right-hand side of the blog and click “Follow”.